Tomorrow, we set off on Mission #002, intending to spend the weekend at Paris Mountain State Park up above Greenville, SC.  Since last month's trip to Lake Greenwood State Park was undertaken in much more late-summer-like weather, we never got around to testing out the furnace in the Aluminum Falcon, but by Golly, that'll be the FIRST thing we do when we get to the campsite tomorrow afternoon!  The forecast is for not even fifty degrees and rain, rain, rain!  Some of my YouTube-ing also braces me for the possibility of said furnace emitting lots of smoke and odor when it first fires up, so we have that to look forward to as well...

But you know what?  I don't care!  Ever since we bought this camper, we've been chomping at the bit to use it, and frustrated by how we're preventing from running off into the wild with it at the drop of a hat because of our "responsibilities."  Weather will not stop us (even though Hurricane Michael proved to me that it WILL stop the U.S. Postal Service, despite what their motto says...), and even if we're trapped inside the Falcon for thirty-six hours, we will Live 'n' Learn about how to make the most of that situation.  Besides, we've spend thirty-six hours and more cooped up in places before and enjoyed ourselves thoroughly, but since this is a family-friendly blog, I'll skip the details... (insert lascivious wink here).

Photos and reports to come once we're back!  Check back in soon!

Posted by Larry Smoak at 6:21 PM No comments:

The "Falcon" gets tagged!

One of the things we learned during the buying process is that RV dealers have to transfer legal title of the RV in question to the new owner within forty-five days of the date of purchase, and that a new buyer cannot obtain a license tag for his new RV until that title transfer is done.  Of course, this process is complicated (a little) if the buyer resides in a state other than the state where he purchased the camper.  Naively, I went to my local DMV office about two weeks after we bought our "Aluminum Falcon" to get a tag for it, where I was told that Camping World in Anniston, Alabama (yes, I know, I know - those two words can be subject for an entirely separate blog post/rant, but we won't do that just now) was yet to submit the title transfer.  I checked again two weeks later - still no title transfer. 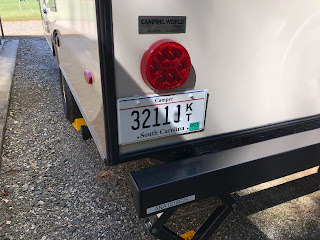 I made a call to the sales rep that sold us the camper thirty days after our purchase to ask about all of this, and he seemed perplexed that the transfer hadn't yet been done, but promised to look into it.  Well, I'll give credit where credit is due, as on day forty-three after purchase, I went to the DMV office a third time, and everything was finally in order.  A mere ten dollars and fifteen minutes later, I walked out with the Falcon's tag, marking him as a South Carolina resident, just like his proud owners!

Of course, under the heading "Nothing Can be Simple," the next thing we learn about RV-ing is that the license plate bracket assembly on our camper is all but useless, as it sits too flush to the rear wall to accept a screw or bolt of any length.  As a result, the new tag is zip-tied to the bracket for now (as was the dealer's tag - maybe they experienced the same frustration...) until we figure out a more secure and permanent solution.

All that said, we've got the Falcon prepped for its next mission, to Paris Mountain State Park above Greenville, SC in a couple of weeks.  Stay tuned for more!
Posted by Larry Smoak at 1:59 PM No comments: 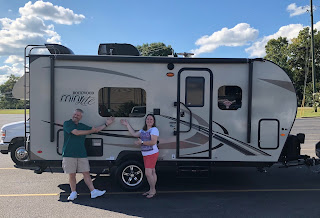 Hi!  We're the Smoaks!  Thanks for stumbling across our blog.  Forgive the rawness, as this is without question a work-in-progress, and neither of us has any clue about the intricacies of blogging, like HTML editing and such.  Have no fear, though, because until just a few months ago, we had no clue about the finer points of RV ownership, either, and we're quickly getting the hang of that!  Hence our name for this blog, where we share how we have entered into this fantastic sub-culture and learned all kinds of new things by jumping in head-first and living through it.  "Live 'n' Learn" is a phrase we have said to each other COUNTLESS times over the last six months, primarily as a way of calming each other down when we began to get frustrated with some new dilemma that arose as we searched for the RV that was perfect for us, or when towing it a long distance for the first time, or when trying to determine just why in the heck our refrigerator wouldn't get cold!

Again, thanks for visiting us here, and please check back often to see what new things we've discovered, whether it's some beautiful new piece of nature we've explored or the solution to some technical snafu about RV ownership maybe you're yet to encounter.

See you out on the road soon!

Larry ("Smokey") and Jessica
Posted by Larry Smoak at 11:06 AM No comments: